An article published by The Journal of the American Medical Association (JAMA) on Monday showed that use of marijuana among seniors is growing dramatically. In 2006, just 0.4% of seniors reported using pot. By 2015, that percentage had risen to 2.4%, and in 2018%, it was up to 4.2%.

With about 47 million seniors living in the U.S., that’s roughly 2 million people over the age of 65 who are using pot. One of the reasons for the spike is due to the growing popularity and broader public acceptance of the drug. Dr. Benjamin Han, who co-authored the paper, stated that “What I’m seeing in my clinic are a lot of older adults who are very curious about cannabis to treat this or that chronic disease and symptoms.”

Among the more concerning findings for the researchers was that cannabis use was up by an even greater amount — 180% — among seniors who have diabetes. And among seniors who also drink, the percentage of marijuana users rose from 2.9% in 2015 to 6.3% in 2018. 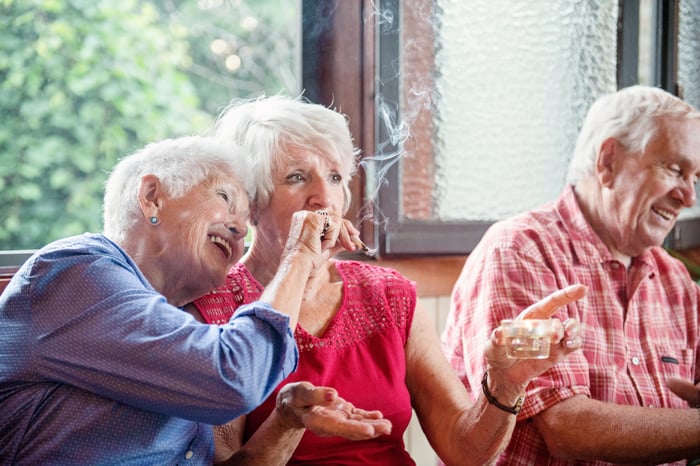 Although 11 states have legalized recreational cannabis and more than 30 states have OKed it for medical use, it remains illegal federally. And regulators are concerned that some companies’ claims regarding the benefits of their cannabis products go too far.

Last year, the Food and Drug Administration warned multistate cannabis dispensary operator Curaleaf Holdings (OTC:CURLF) and other companies about the claims that they were making about some of their cannabidiol (CBD) products, including that they can treat cancer and other serious illnesses.

Curaleaf enjoys significant credibility in the U.S., where more than 165,000 patients use its products. The marijuana retailer operates in 14 states, and in the past 12 months, has generated more than $177 million in revenue.